It’s time to do some winding, my friends! 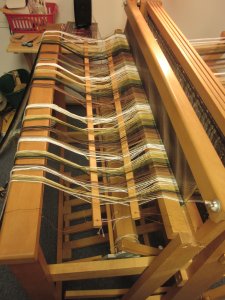 The view from the front!

Lots of yarn ready to move!

I find that winding the loom is a deceptively difficult part of the process. On the surface, it seems really easy! Give each group of yarn a yank, unlock the loom, roll it onto the back and repeat for the new few hours. But, like many things in life, there are pitfalls to watch out for. Am I pulling some yarns harder than others? Are the yarns spreading out too far on the back so they don’t fit on the yard sticks? Am I getting the twisted yarns out of the way so I don’t break them going through the reed & heddles?.. But, if you are beginning weaver, ignore what I just said and simply yank, unlock and roll! Piece of cake!

Love me some yard sticks!

Closer look at the back beam…

Of course I have to take a moment to reiterate my love of yardsticks! I have a 36″ loom so they fit perfectly at the back, keeping the yarns winding on smoothly! And I don’t know of anyone else who uses them these days. So, I feel like I could be the official champion for the lowly yardstick! They are awesome! (This impromptu advertisement was not endorsed by any yardstick company. But, could be in the future… call me!) 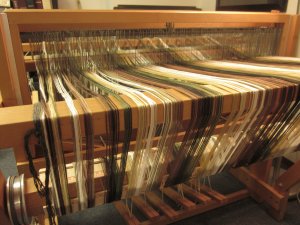 View from the back! 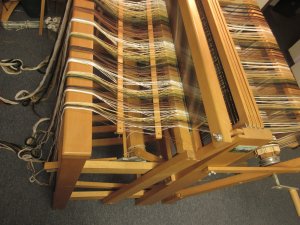 If you will note, I still have my lease sticks in the yarn. I have found that they come in very handy! They are a sort of early detection system for snarls in the yarn! It’s better to catch and fix the twisty bits before they hit the reed!

Time to tie it up!

I like to start in the middle when tying up a project, grabbing about 1-1/2″ of yarn for each knot. The goal here is to create equal tension in all the yarns throughout the width of the project. I think it’s one of those things you wrestle with forever! I’ve been weaving for 9 years and still do a bit of agonizing over it each time I start tying things! But according to my girl, Madelyn Van Der Hoogt, I should just breathe through it and relax. She’s sort of the zen master of weaving – at least in my book! 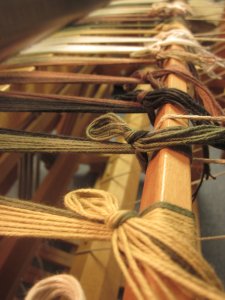 Ta-da! Dressing the loom is finished!

And we are done! The loom is all dressed and ready for weaving! Let’s see if I can make some good thing happen next. Love the weaving magic! Talk to you soon…

Free Shipping On All Orders! Dismiss