Have you ever attended a trunk show before? A trunk show is historically an opportunity to feature a vendor/artist who may or may not be a regular at a boutique. In this case, I’ve had my work at Aveline in Benton Harbor, Michigan since it opened a year ago. And Elizabeth, the owner, encourages the participating artists to get involved – including doing a trunk show as another way to generate excitement!

When she first brought it up earlier this year, I jumped all over that opportunity! And I decided my friend, Chylene with Kampfire Studio, was going to do it with me! (That sounds rather aggressive, doesn’t it? I promise I asked her nicely!) Chylene is a wonderful potter and we’ve known each other for quite a few years now. So, we’re buds! We’ve lamented over the challenges of being artists and celebrated our big & little successes over the years. So I knew she’d be the perfect partner in crime for such a party! 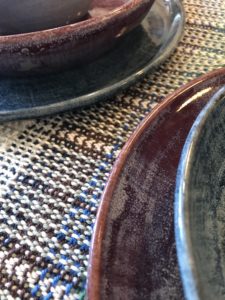 A combination of Acton Creative and Kampfire Studio – a perfect marriage!

As we started brainstorming names for our trunk show last spring, we liked the fact that both weaving and pottery are such old craft forms. They’re the originals, so to speak! We decided to call it the Flame & Fiber Trunk Show to capture the spirit of them both! Fun, huh?

The original Flame & Fiber Trunk Show was held in March. And with the holidays quickly approaching, we thought it would be a good idea to have an official “holiday edition”! So last Saturday, Chylene and I set up shop at Aveline for the afternoon. The goal was to entice folks to get a head start on their holiday shopping. 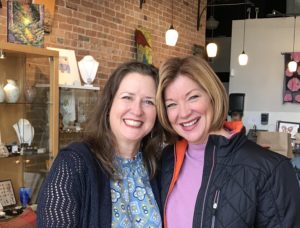 We had a fairly light crowd, but was still worth it! There were a few definite highlights for me throughout the event. Within the first half hour, a group of ladies walked in and my friend, Laurie, was part of the group! She and I worked together in the corporate world over 10 years ago and I haven’t seen her since then – crazy! While she still lives/works in the Chicagoland area, she now also has a beach house not too far from Aveline. So, she rounded up some friends and came over. It was so much fun seeing her!! I’m hoping we won’t wait another 10 years before seeing each other again! (You know what it’s like, seeing a long lost friend? It’s the best!!!) With these kinds of events, the connections you make are so important – personal and professional!

One of the other fabulous moments of the afternoon was being able to collaborate with Chylene & Elizabeth! At the spring trunk show, Chylene and I combined our products for a mini photo shoot. I have a beautiful series of images with her pottery sitting on top of my handwoven table runner. Gorgeous!!! They go together like peas and carrots, I’m telling you! So this time around, we definitely wanted to create some updated images. Dave (Smykman Primitives) got into the fun and did a lovely job directing us. 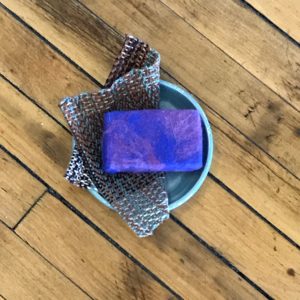 This is the magic combo – found only at Aveline!

All this fun led us to a conversation about combining products to sell together. Earlier this year, I had a request for woven washcloths. I did some for this particular client, but quickly realized that no matter how I looked at it, it was going to be nearly impossible to sell them for a profit. One of my ideas on how to remedy that was to include it in a basket of other items that can be sold for a higher ticker price. My thought was to have a washcloth/soap/soap holder combination, which could be a lovely housewarming gift for someone.

As I was showing the ladies my woven washcloths and thinking out loud, Chylene found the perfect sized dish, and then Elizabeth jumped into the conversation offering up a felted soap to round it out! Perfect!! They are so sweet together!! Hopefully, they’ll be ready for the Aveline Anniversary Party coming up in a few weeks! 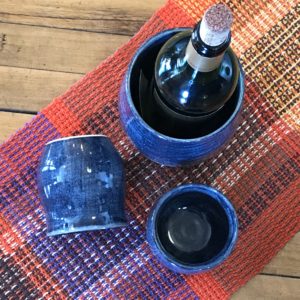 Won’t this look beautiful on your kitchen table?

Flame & Fiber Trunk Show was definitely intended to be an opportunity to bring awareness to Acton Creative, Kampfire Studio, and Aveline (hopefully selling lots in the process!). But the irony is that when I look back on the experience, it’ll mean so much more because of those special moments connecting with folks in the community and other talented artists. I’ll keep you posted when the next one makes it on the calendar – I’d love to have you join us! In the meantime, the collaboration will carry on! Happy weaving, friends!!