Steady as she goes

Steady as she goes

It’s the week after Thanksgiving and I’ve survived all the cooking/shopping/socializing that accompanied it! While last week had a specific deadline (Thanksgiving), this week is all about getting my bearings and recovering from the break from normalcy. The holidays are coming up fast and life feels like it is swirling at a quicker pace than usual. So, what’s a girl to do? Start a new project, of course! 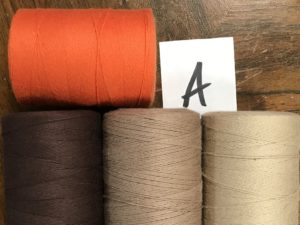 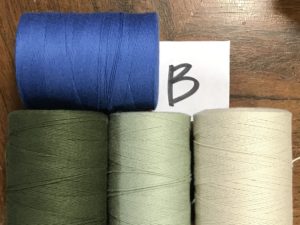 Something I started a few years back was letting Acton Creative Facebook followers choose the combination of yarns to be used in an upcoming project. I historically pull together two groupings of four colors of cotton, and let the audience pick their favorite. (Please note that I’m always careful to select two options that I like, so it truly doesn’t matter which one wins.) The timing of the voting coincides with an event (art fair, trunk show, etc.) and the yarn is used for the demonstration project on my table loom.

I had the gang vote on some options earlier in November (the B’s won!) with the intention of using those colors at the Flame & Fiber trunk show in Aveline. However, life/the week/my schedule completely got away from me and I didn’t bring the table loom to Saturday’s party. So, I’m left with a beautiful foursome of colors just begging to be incorporated into a project! 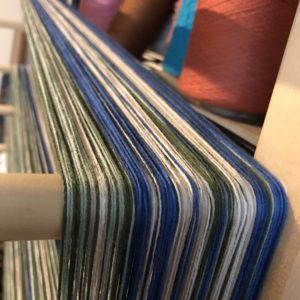 Around & around we go!

That’s where we land today! I’ve decided to use the yarn to create more Fingertip Towels, which is something I can easily do on the table loom. Because of the many years I’ve dressed the table loom in exactly the same fiber, I have a formula in my head that makes the planning process fairly quick. I like to set the project (no matter how long) at 12 yarns per inch, and my Fingertip Towels take up 12 inches wide in the reed. Simple, right? 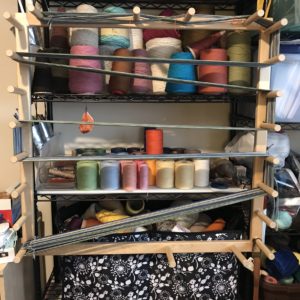 Project on the warping board

For this one, I thought I would purposely do a bit more of a striped warp than normal. Personally, I love stripes! But, I think you need to use them thoughtfully. Woven fabric can look very plaid-ish if you aren’t careful. So, I planned for 2-inch stripes in the warp with each color making a sneak appearance in the other’s stripes – a way to tie everything together. (It’s trickier to translate the innate design process from my head to paper that I thought! The images explain it better!) 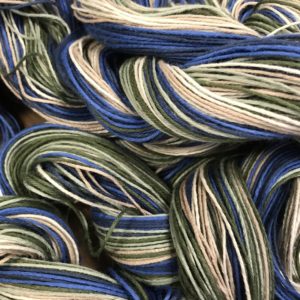 Full disclosure, I added two yarns from the original four colors just to round out the plan. (Dear Facebook followers, even though I added 2 new colors, I kept the same color palette so it still looks like the “B” version that won. I didn’t go completely off the rails – promise!) I got the project warped and off the warping board. My goal is to have enough fabric for at least 6 towels. That’s the goal, mind you. There’s always wiggle room for reality! I’ll keep you posted…

Keep on weaving, everyone!